Migrations are some of the biggest and also darkest realities of globalisation. Sometimes for economic motives, on other occasions because of war, discrimination, or injustice, a good proportion of humanity lives far from home, with consequences for individuals and their communities in the fields of psychology, work, economy, religion, and society. It affects millions of people in every place, whether countries of departure, of transit, or of arrival. It presents challenges which the Church accepts and faces with a spirit of charity.

A migrant is someone in a very difficult stage of his or her life: their roots are up in the air, full of homesickness, in need of dignity,, work, and recognition, they are far from families and from their social, cultural, and linguistic surroundings. They also confront indifference, incomprehension, coldness, and sometimes exploitation, prejudices, and social exclusion. 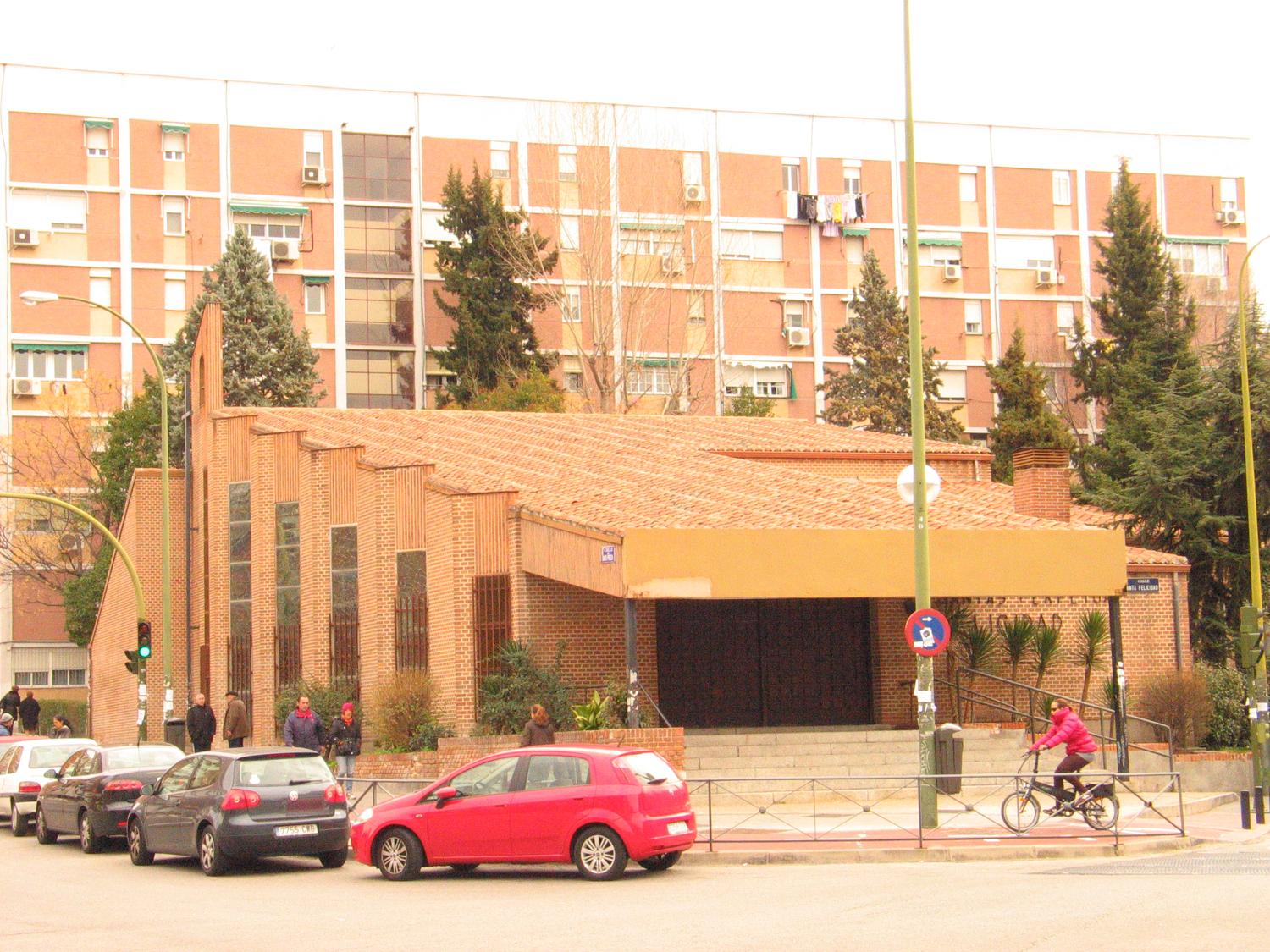 Parish of La Elipa in Madrid, where the Augustinian Recollects served from 1965 to 2016. In the beginning, it was a neighbourhood in the city’s outskirts, built to accommodate rural migrants from all over Spain. By the 21st century it had become a neighbourhood receiving foreign immigrants.

For years, the province of St Nicholas of Tolentino has looked after immigrants. It has been in touch with Spanish migrants in Germany, Latinos in the United States, Nicaraguans in Costa Rica, Africans in Spain; Filipinos in Taiwan, Chinese in Spain. There are also internal migrants from rural areas to great cities such as Manaus and Fortaleza in Brazil, Mexico City, or Madrid, in the La Elipa neighbourhood from its beginnings and also looked after from  the parish of St Rita since the 1960s. 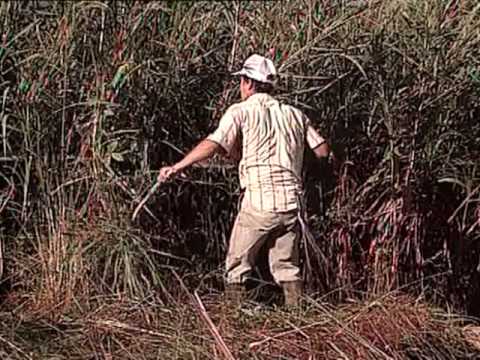 Looking after Hispanics in the United States

In 1911 some Augustinian Recollects were sent to study in universities in the United States, establishing the first presence of the order in that country. The first community, belonging to the Province of Our Lady of the Candelaria, was set up in Omaha, Nebraska, in 1917. By 1943 the Order had expanded and formed a new Province, that of St Augustine, which in 2018 will be uniting with the province of St Nicholas of Tolentino to form a new province.

The history of the Augustinian Recollects in the United States has gone hand-in-hand with Hispanic presence. The irruption of immigrants exceeded the boundaries of the Catholic Church in the United States, with its European roots. The recollects, from a Latin culture, were needed in various places. After long discussions, in its Provincial Chapter of 1969, the bi-cultural, bi-lingual Province of St Augustine, took the decision to dedicate itself chiefly to the Hispanic apostolate. In that same year, the Province of St Nicholas came to Texas and New Mexico, and, later, to New York and new Jersey. This geographical situation illustrates the link between ministries and the reality of immigration.

On 11th December 1999, the Guadalupe Centre was opened in Union city, on the Hudson River, a communications centre and exit for the Lincoln tunnel which unites Manhattan with New Jersey and Newark airport. It was a long-awaited event in a diocese where the Catholic Hispanic population is of crucial importance.

In 1989 the diocese approved the “New Presence” plan, which included a centre for integrating Hispanic leaders into the pastoral and social responsibilities of the diocese. It was an initiative of the Archbishop at the time, Theodore Edgar McCarrick, with the encouragement of his auxiliary bishop David Arias, a Spanish Augustinian Recollect, and the person in charge of the Hispanic apostolate until his retirement in 2004. His belonging to the Order made sure that the Province of St Nicholas would be chosen to take responsibility for the new Centre.

An agreement was signed in 1997 and the Augustinian Recollects started to run the parish of the Holy Family and the Guadalupe Centre. They took over a former school that was refurbished throughout 1998, with eight classrooms, a cafeteria for 80 people, an auditorium, three conference halls for between 70 and 80 people, a library and a Spanish-language video room, and dormitories for 72 visitors. On the flat roof there was space for a stroll and for relaxing.

Acting together with the Hispanic Apostolate Office of the Archdiocese of Newark, the Centre hosted the Institute for Pastoral Formation with courses in theology, the Bible, catechesis, Church history, morality, patristics and teaching and practical aspects of pastoral work. The province provided professors from formation houses in Spain and Mexico. In addition, the Guadalupe Centre worked in conjunction with Hispanic formation centres throughout the United States.

The Guadalupe Centre complex included a Spirituality Centre with a capacity for 72 people on retreats, conferences, and meetings, Marriage Encounter groups, Cursillos of Christianity, schools of evangelization, charismatics, youth groups, and catechists.

The leadership of the Centre set the programme for activities. Among the problems identified were economic difficulties, which in the end would be the main reason for the closure of the Centre, and the lack of solid formation among the beneficiaries. Bur whilst it operated it was a reference point and a social catalyst for Hispanics

It was also a means for strengthening the province of St Nicholas in the United States. In 2001 the province opened a four-storey building, from which to look after the Guadalupe Centre, two Union City parishes (Holy Family and St Augustine), vocations work, the residence for aspirants to the Order and the headquarters of the Augustinian Recollect Secular Fraternity.

In 2013 the economic crisis, and the diocese’s lack of resources forced the Centre’s closure and the end of its activities. It brought to an end the province of St Nicholas of Tolentino’s co-operation in this field of the formation of Hispanic leaders in the Diocese of Newark. Nevertheless, the Province continued serving Newark in the two parishes of Holy Family and St Augustine.

Whilst the spiritual needs of  Spanish-speakers has always demanded the greater part of the energies of the Recollects from the time of their arrival in the United States, the renewed emphasis on the Hispanic ministry is a result of the growing needs of the Hispanic population in the parishes, especially in Southern California, where the five parishes run by the Augustinian Recollects have an  migrant population that can’t be ignored. 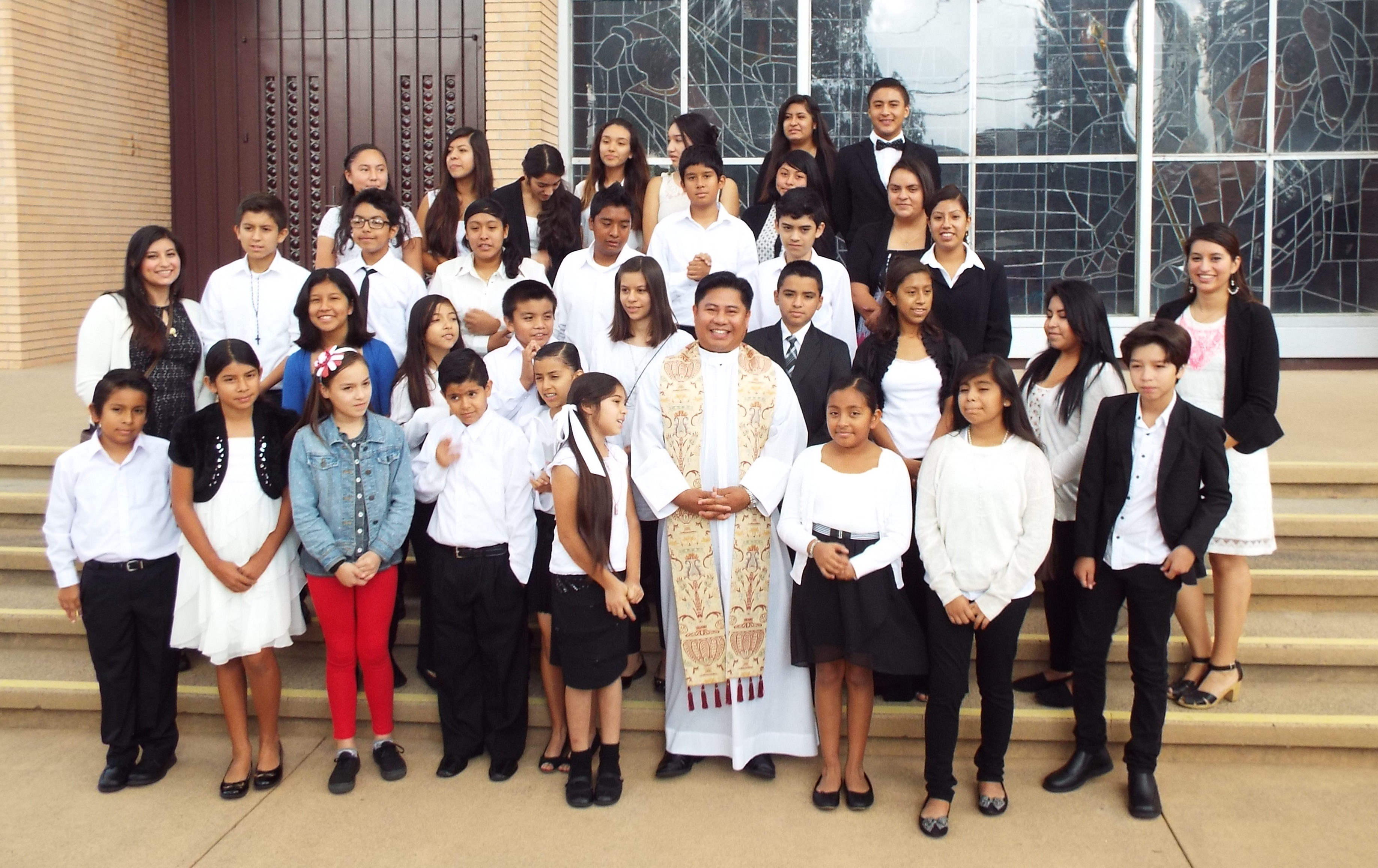 Parish of Our Lady of Guadalupe, Santa Ana, California.
The parish of St Benedict and the parish of Christ the King are located in the Los Angeles area. They serve a big Mexican population, but here there is a presence of other people of different nationalities, Filipinos for example.

The parish of Mary, Star of the Sea in Oxnard serves a predominantly immigrant population: 50% Mexicans, 40% Filipinos and the rest from many other cultures, including Samoans, Koreans, Vietnamese, and Europeans. 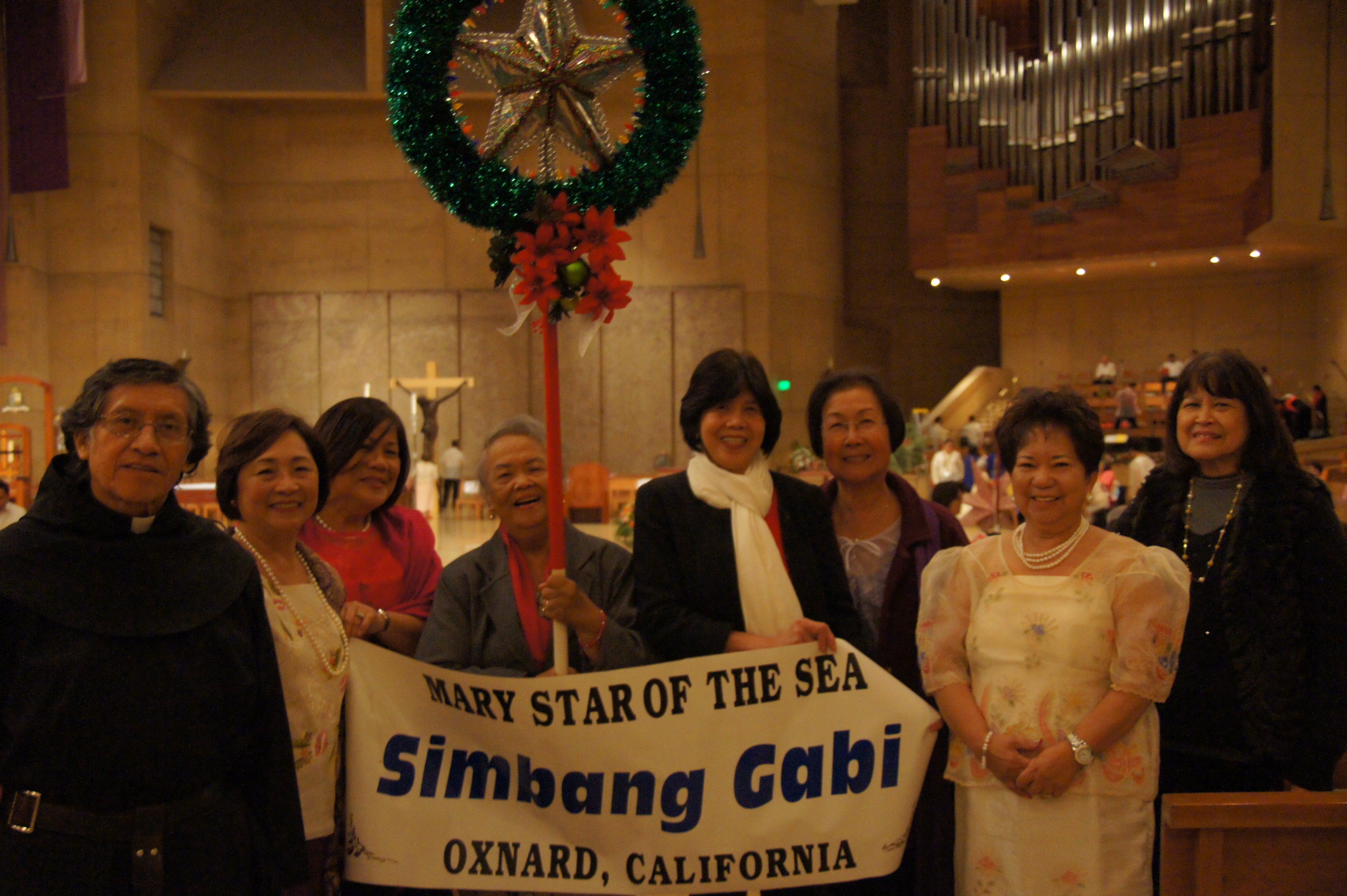 Parish of Mary, Star of the Sea, Oxnard, California.
In Suffern (New York), the monastery of Tagaste serves the Hispanic population of the area in a special way. There is a very diverse group of Mexicans, Puerto Ricans, Dominicans, Ecuadorians, Colombians, Peruvians, Guatemalans, and Spaniards. In the Recollect community they come together for their Sunday masses in Spanish, for meetings, youth groups, and celebrations of patron saints from their home countries. 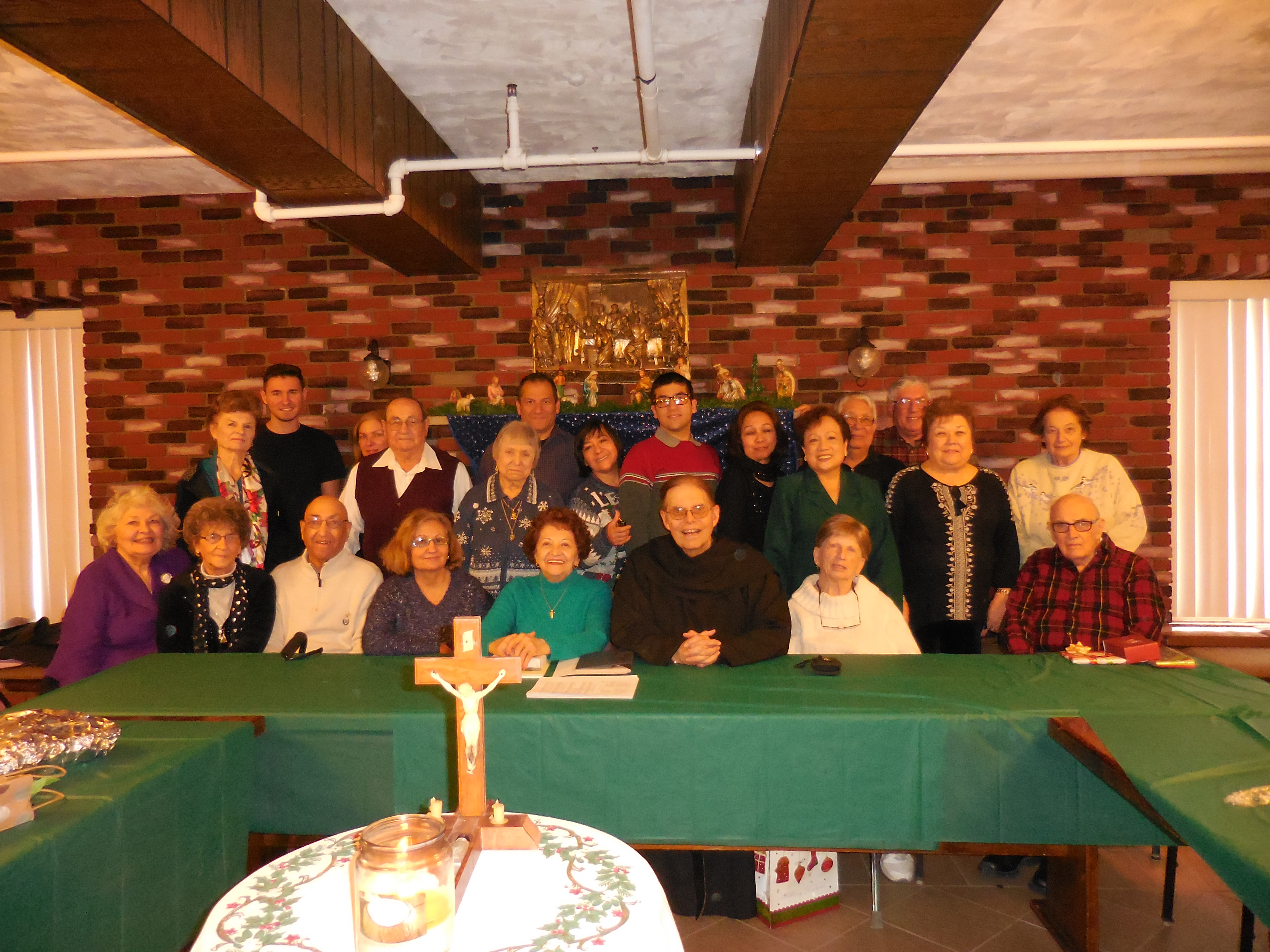 Tagaste monastery, Suffern, New York, Secular Fraternity.
There has been a notable effort of cultural adaptation and respect for people’s diverse practices. The feast of our Lady of Guadalupe is celebrated with novenas and major events every December, as well as the posadas, for the Mexicans; in some of the parishes the Simbang Gabi and the Santo Niño are celebrated every year for the Filipinos.

Various social programmes have been set up, and these benefit especially the migrant population. The parishes provide foodbanks and co-operate with different Catholic social organisations offering legal , medical, educational, and work-related support. English classes are also available, as well as activities to favour integration. 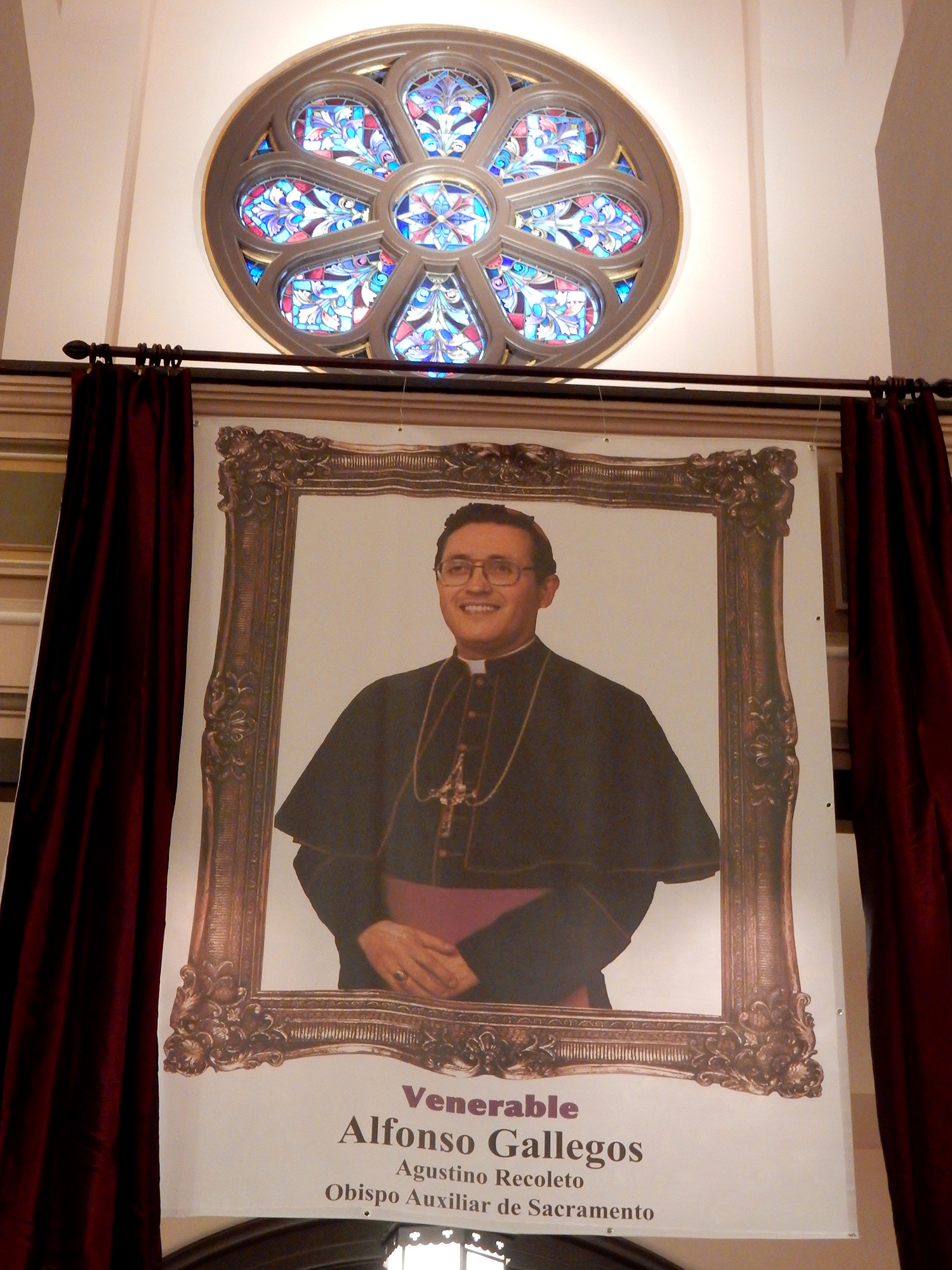 Alfonso Gallegos, the bishop of the Hispanic apostolate in California. An Augustinian Recollect on the path to beatification.
Many immigrant parishioners are involved in social campaigns, such as pro-life action, environmental issues, and the rights of immigrants. This sort of activity normally takes place in conjunction with the diocese where the parish is located.

The bilingual ability of the religious (Spanish, English, Tagalog) favours the care of spiritual and social needs. The provision of religious services in different languages ensures that these parishes are full of life. You can hear people greeting each other in various languages, creating a rich cultural interchange of support , and also everything that reflects one’s own culture, such as food, music, and folk dances. 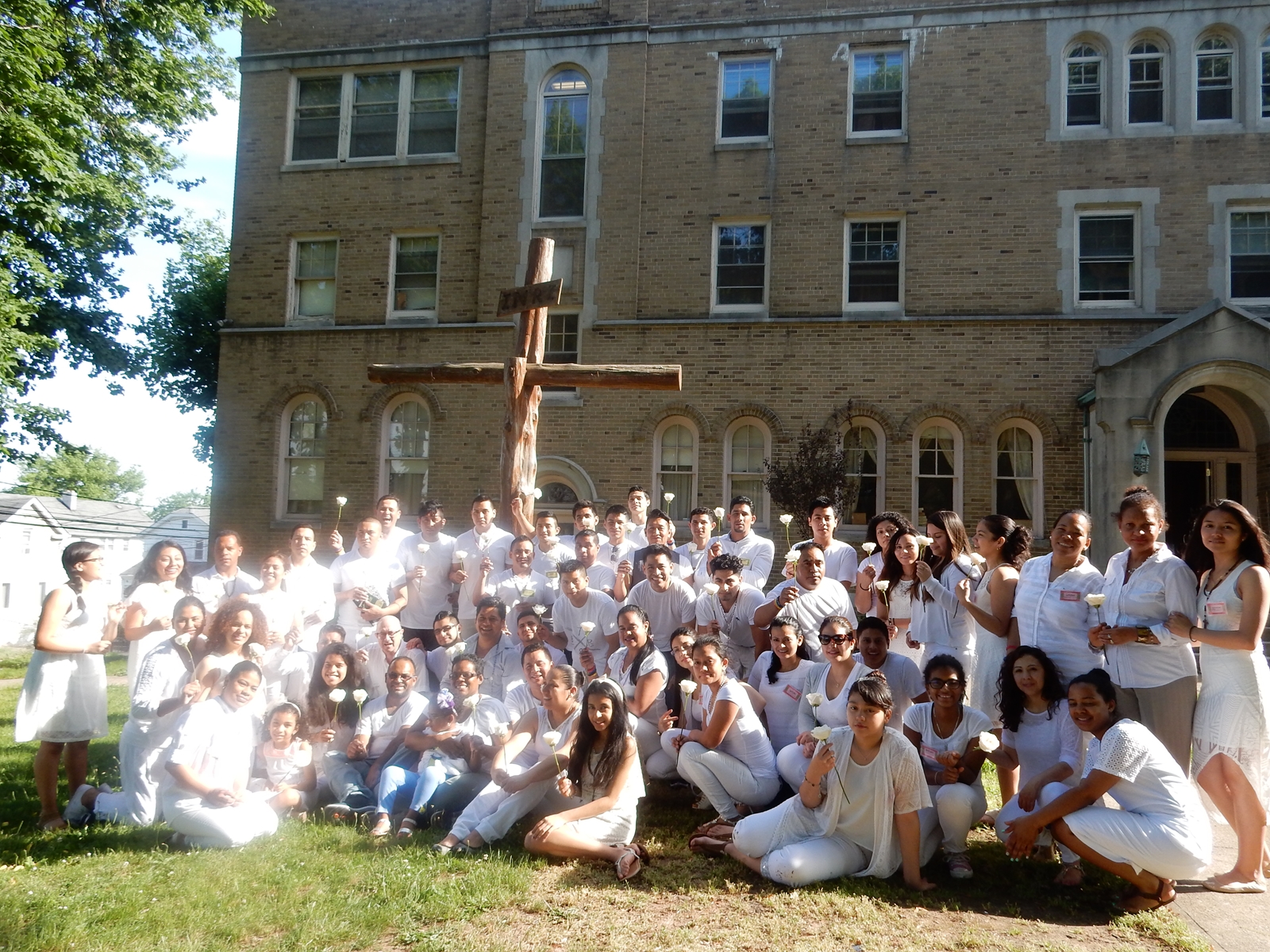 Youth work in the parish of St Augustine, Union City, New Jersey.
With regard to the parishes in Texas, the close presence of one of the most complicated national frontiers, and which has the greatest daily number of people crossing, between El Paso (Texas) and Ciudad Juarez (Chihuahua), means that the task of the Catholic parishes has special and unique elements. The country is a kaleidoscope with dozens of cultures and languages that live together in peace and harmony, and the Catholic Church in the United States cannot be otherwise.

Latin-American Chaplaincy, London
index Introduction Missionaries out of necessity Mission, a complex and all-embracing term Religious, lay people, and volunteer missionaries Missionaries according to the laws Constitutions of the Order of Augustinian Recollects Statutes of the Missions Missionaries by inheritance St Augustine Cultivating the missionary spirit The Augustinian Recollection, missionary right from the start The three stages of the Augustinian Recollect missions The Philippines, “surname” of the province of St Nicholas Japan, seed-bed of martyrs The Province’s missions in the 19th century The missions save the Order Spreading out throughout the world (1896-1906) St Ezequiel Moreno The Province’s missions in the 20th century Introduction The Philippines in the 20th century Prelature of Ciudad Madera (Chihuahua, Mexico) Sarapiqui (Costa Rica) Kamabai and Kamalo (Northern Province, Sierra Leone) Kaohsiung (Taiwan) Missionaries today MISSIONARY ZONES Prelature of Labrea (Amazonas, Brazil) History of the Purus Physical description of the region Social geography Evangelization Diocese of Shangqiu (Henan, People’s Republic of China) Historical background to the Augustinian Recollects in China Shanghai Preparation (1919-1923) Geography, economy, and society of the Kweiteh mission The first stage (1924-1930) The second stage (1931-1937) The third stage (1938-1952) The fourth stage: beyond the bamboo curtain MISSIONARY MINISTRIES Boy's Town (Aguascalientes de Cartago, Costa Rica) St Monica’s home (Fortaleza, Ceará, Brazil) CARDI, the Augustinian Recollect Centre for Integral Development, Mexico DF Service to immigrants Latin-American Chaplaincy, London The Chinese chaplaincy in the Archdiocese of Madrid