I have tried to "capture in the gesture of his face the compassion and affability of someone who has been called the «Almoner of God»", affirms the Recollect painter David Conejo, who is fond of his creations in such a way that he contemplates them as a continuity or expression of his intimate spiritual and artistic life. 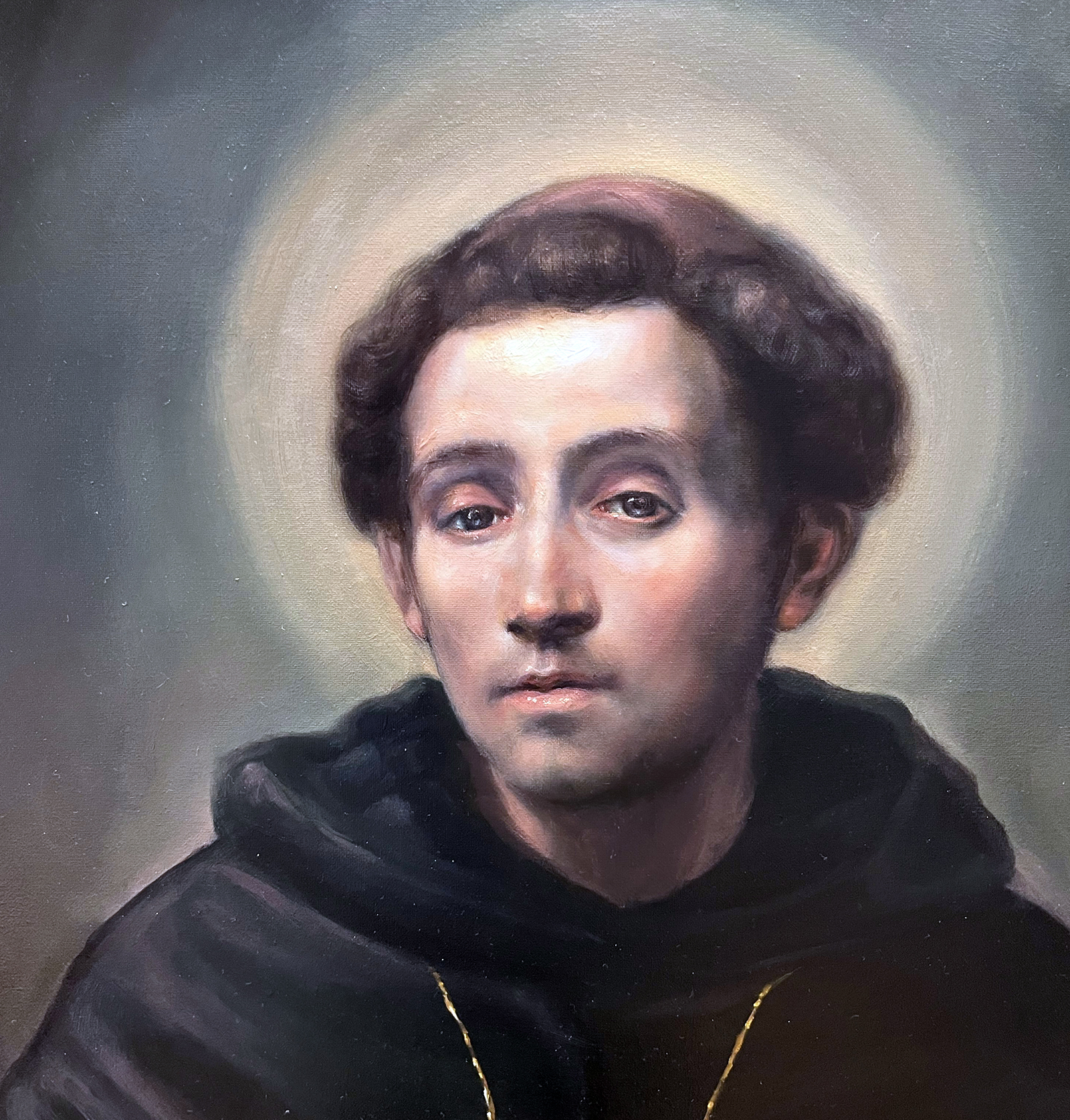 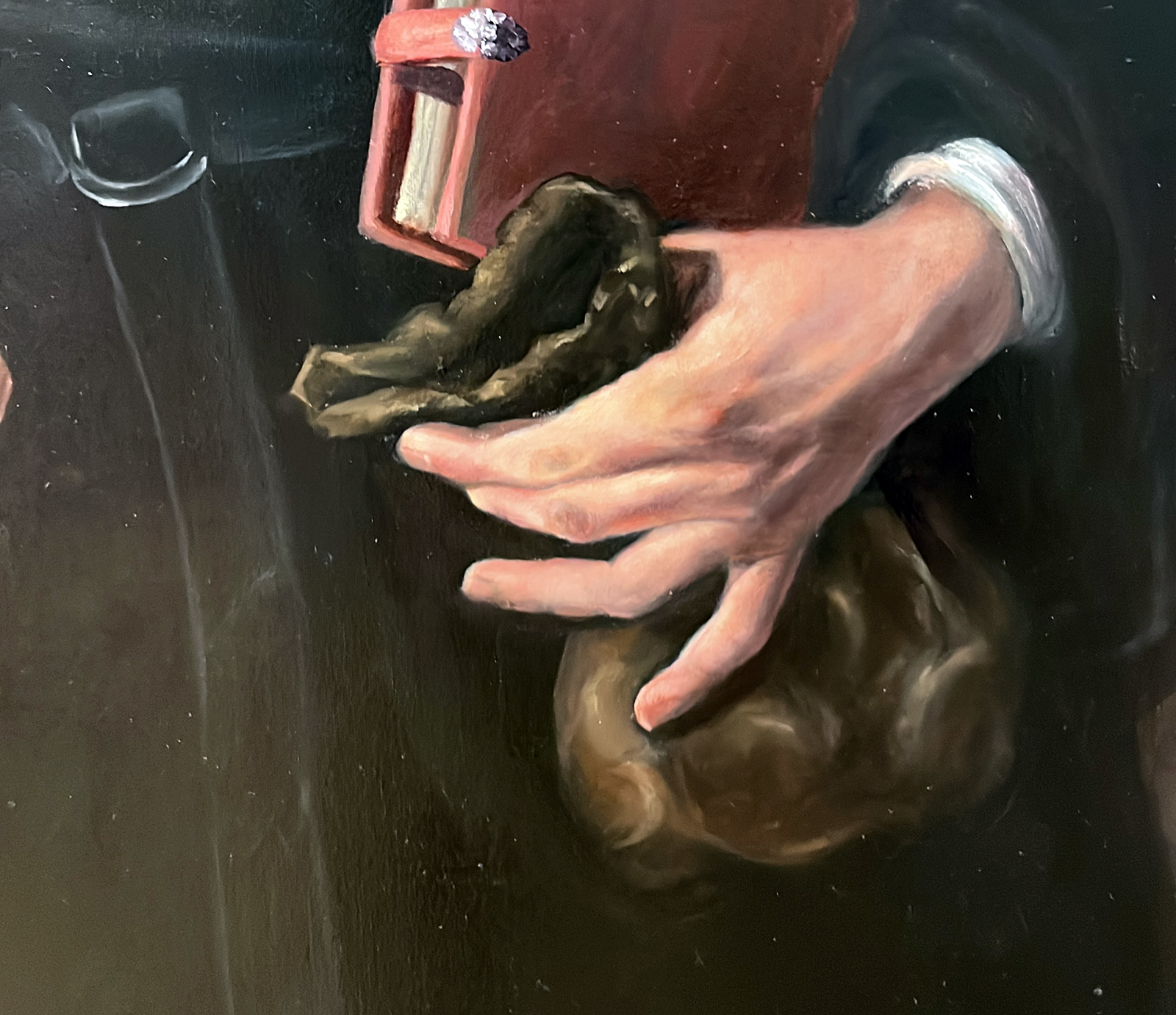 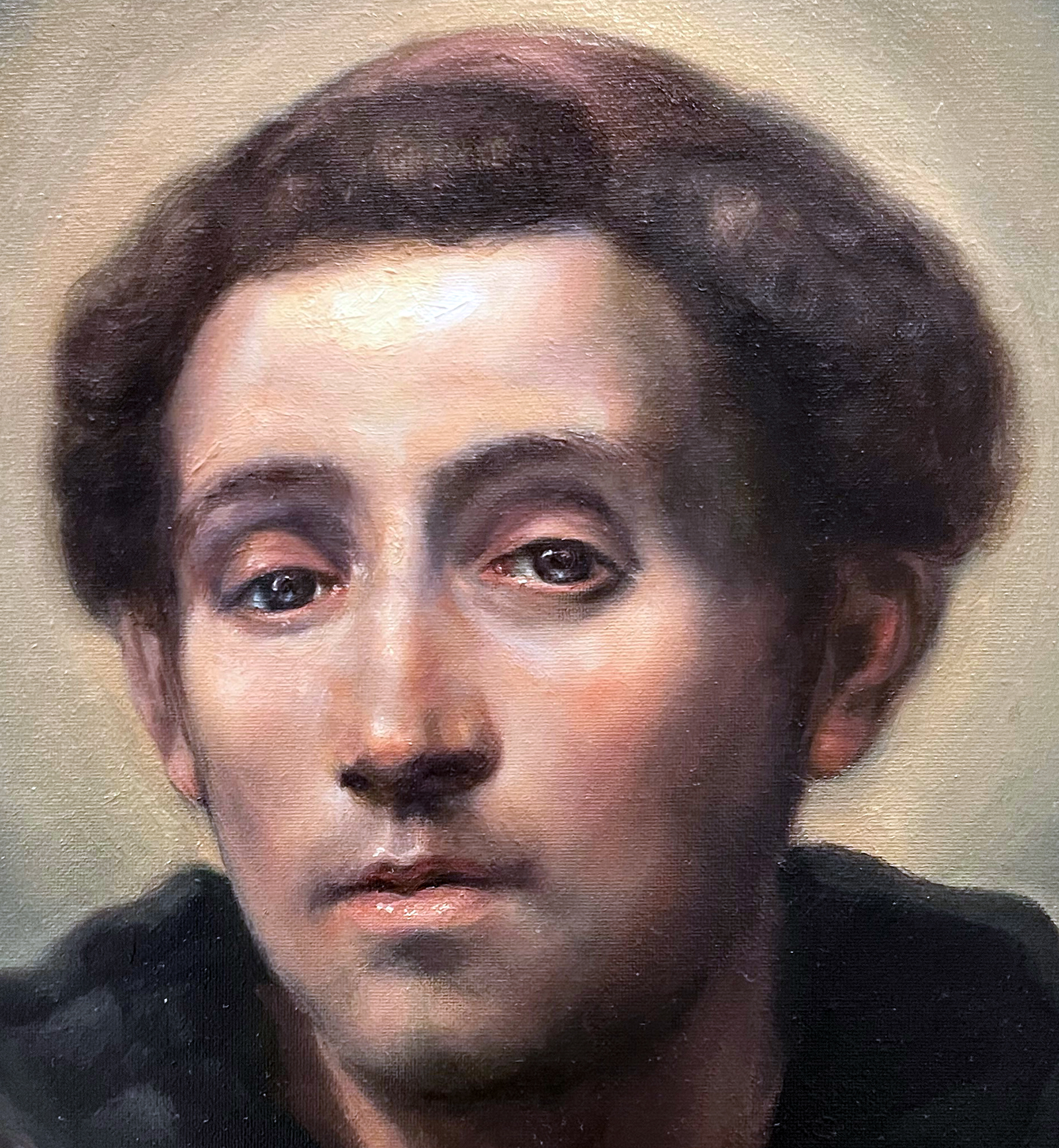 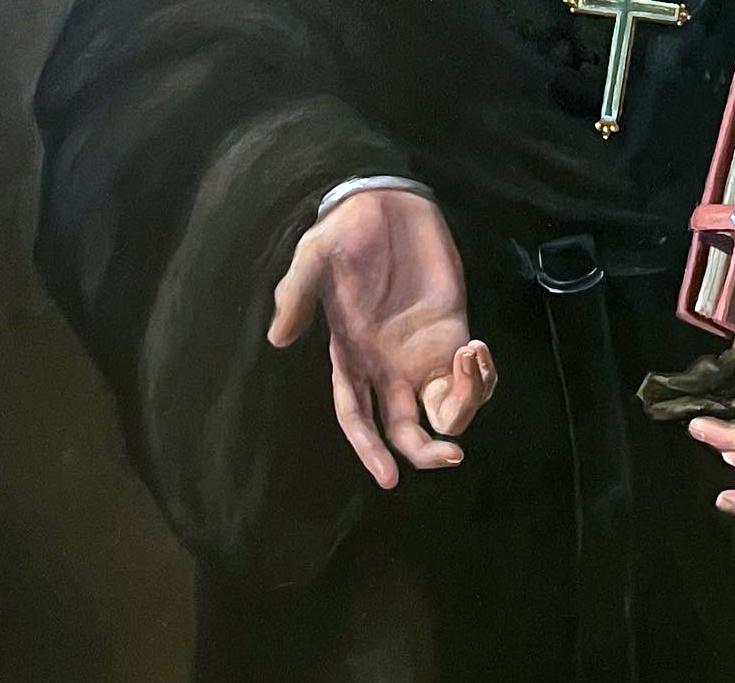 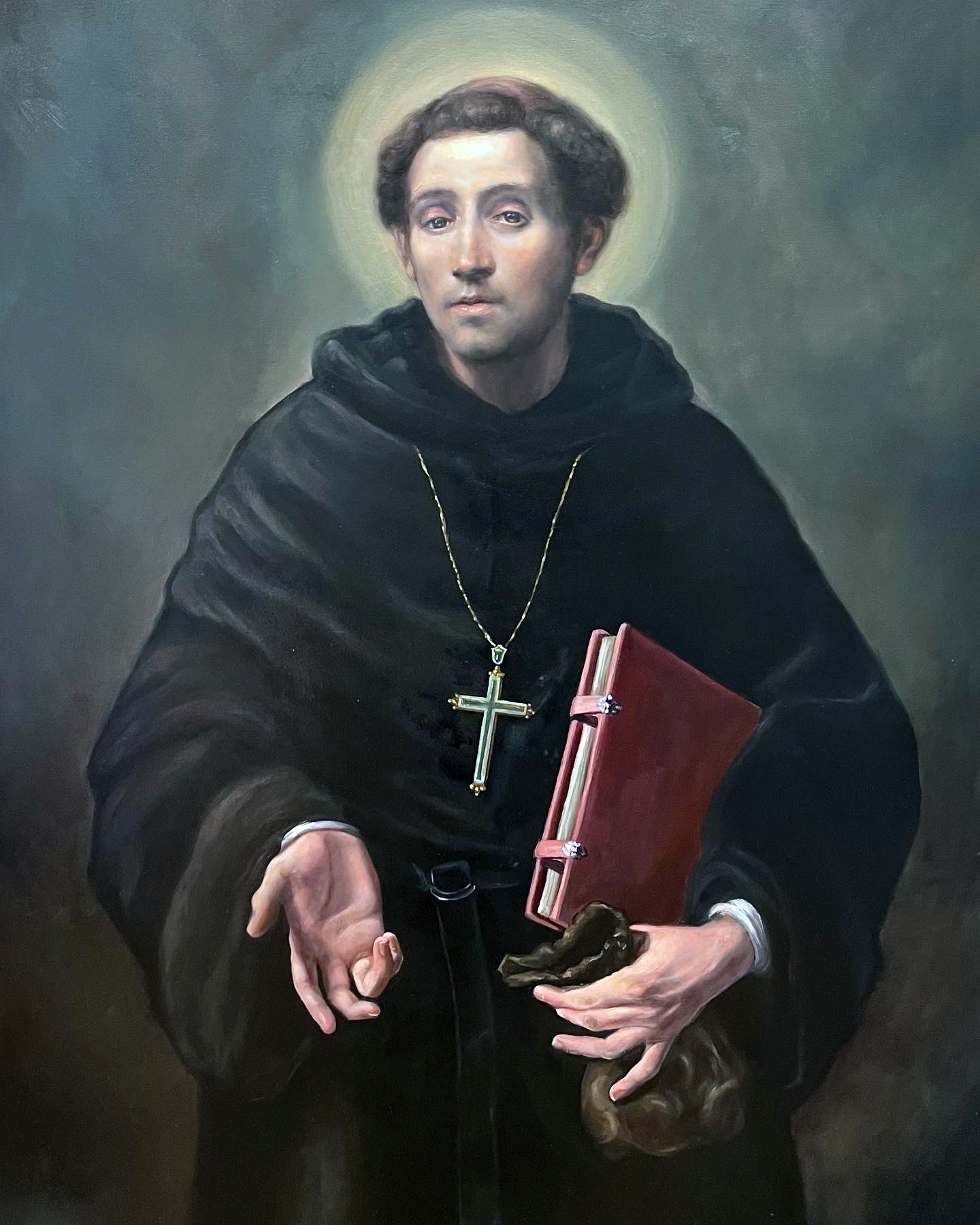 Before inviting him to talk about himself and his artistic work, especially the oil painting on canvas -100 x 80 centimeters- of Saint Thomas of Villanova, we are going to give body and reality to David Enrique Conejo Ramírez, who was born in Cartago, Costa Rica, in 1993. "I have been an Augustinian Recollect religious since August 8, 2015 and a priest since September 4, 2021," he affirms decisively. Since childhood he showed interest in manual arts and especially painting. "My first basic drawing lessons were received while I was in high school." He began learning to paint once he had already begun his vocational process, with the intention of becoming an Augustinian Recollect, in the postulancy of Pozos de Santa Ana, in Costa Rica. “Later, as a religious -he says-, my superiors asked me to begin a more rigorous training in oil painting, which I began at the painting academy of my teachers Alejandro Decinti and Óscar Villalón in Madrid. I have kept in touch with them ever since and from time to time I return to carry out internships and projects.

This is the biographical sketch of David in broad strokes, to whom we pose a series of questions.

How many years have you been in artistic production and what motivated you to enter this world of pictorial art?

Although I did other minor works before entering religious life, what can be considered a proper artistic production began in 2014 with the completion of my first large-format painting, which would be seven years of work. I was motivated by the taste that I manifested for painting since I was a child and the impulse that my formators and superiors have given me, seeing in this task a field of evangelization and help in the transmission of the faith and of our Augustinian Recollect charism.

Which figure-painters do you especially admire and why? Are these authors a source of inspiration for you?

Due to their technical and artistic quality, there are many painters that I admire. However, I can mention some that not only stand out for the beauty of their works and their skill, but also for the service they have rendered to the Church through their work, which they carried out from assiduous religious practice and sincere faith. This detail makes his works convey in a particular way the piety and transcendence of the evangelical message and the lives of the Saints. Among them I can mention Giotto, Blessed Juan de Fiesole, better known as Fra Angelico and Bartolomé Esteban Murillo.

Focusing on the painting of Saint Thomas of Villanova, what moved you to paint him, to recreate his figure? What traits of his personality and spirituality have you wanted to bring to his representation?

This work was commissioned by the prior provincial of the Augustinian Recollect Province of Saint Thomas of Villanova, today the prior general, Fray Miguel Ángel Hernández, who wanted to have a recently made image of the saint. For this I wanted to reflect the simplicity that characterized him and the tenderness with which he approached those who needed him most, dispensing with complex compositions that would have required a larger format and a dedication that he could not afford at this time. So I have stayed with his figure, only in its most essential features, with the intention of capturing in the gesture of his face the compassion and affability of someone who has been called the “Begger of God”.

In this your painting you dispense with some of the usual attributes of the saint, such as the staff and the miter, typical of a bishop, which was Tomás de Villanueva. What reasons have there been for this?

In the history of art, magnificent representations of the saint have been made, at a technical, compositional and connection level with the viewer. Most of these works, however, are made in large formats, which in this case was not a viable option. The format he had (100x80cm) required a synthesis that would allow both the comfort of work and the transmission of the essentials of his figure. Adding all the episcopal insignia would have led to a perhaps too striking, even distracting result, which is why I have chosen to keep only the pectoral cross on his habit as a reminder of his episcopal dignity. It is also significant because it is the only episcopal insignia that, being close to the heart, recalls the saint's love for Christ crucified in the poor, but victorious by the strength of his sacrifice. A love that materializes in belonging and fidelity to the Church, Bride of Christ.

Every artistic work communicates a message. What message do you want to convey in this case?

As I have mentioned, the painting portrays Saint Thomas in a simple way, dispensing with elements that could be a distraction to the viewer. However, in the simplicity of the composition there are still symbolic elements that convey traits of the saint's life and personality. The compassionate and docile look recalls the paternal and merciful dimension of Saint Thomas, model of friar and bishop. He wears the Augustinian habit that frames with its black color a still life formed by the hands and some attributes. It is there where the greatest symbolic load of the painting is contained. The right hand, in a welcoming attitude, with the canvas seen "upside down" reveals the position of blessing. This detail means that the hand that welcomes the needy does so in the name of God. Welcome and bless.

On the other hand, the left hand holds a bag with coins and the book of the Gospels. This hand delicately holds the bag, guarding it without selfishly holding it. It is a sign that the saint's assets were dedicated solely to helping those most in need.

At the same time, the two fingers that fall on the bag without holding it, recall the gesture of running legs. This is inspired by the passage in 2 Cor 5:14: Caritas Christi urget nos. The love of Christ is compelling, it is not lazy. Run to the aid of those who have material and spiritual needs. Saint Thomas embodied this passage with his life, not only with material aid to the poor, but with a pastoral zeal that took care of teaching and preaching. That is why the Gospel appears in the painting above the bag of coins. The Good News is the greatest gift that the saint could share and that he teaches us to share. Only with the Gospel and in the name of the Gospel is his concern for the forgotten of society understood. Because the zeal to announce Christ, if it is not accompanied by concrete gestures of charity, remains empty, but, if charity is exercised without putting Christ first, it becomes a merely human work, altruism that does not save: it fills the stomach but not the heart.

Your dedication to painting can be said to take second place in terms of time. However, the number of your works is already high. Do you have them accounted for? Which of them deserve special appreciation and affection?

I usually keep a record of the works that I have been doing, some minor ones that I do as practice and then give to people close to me, others that carry out a more complex process of thought and execution. The latter probably exceed twenty, and most of them are found in houses of the Province in Spain. Among them, I have special affection for the painting of Saint Magdalene of Nagasaki, because in her creative process I was able to approach the figure of the Saint in a particular way and cultivate my devotion to her, in addition to having been the first of my works to be spread throughout the Order and the Augustinian Family. I also find significant the painting of the Virgin of Consolation, which was my first painting and is preserved in our seminary in Pozos de Santa Ana in Costa Rica, and the painting of Saint Joseph that I was able to personally deliver to Pope Francis last March, both for the occasion and for the fact that it is the first time that I have worked in collaboration with other artists on the same project.

Your works are fundamentally religious-themed, even adhering to Augustinian-Recollect religiosity-spirituality. Aren't you attracted to other topics?

Due to the circumstances in which the learning and use of painting as a means of apostolate has arisen in my life itinerary, there are two aspects that I would emphasize about this gift that God gave me. On the one hand, the vocational dimension. I would not understand my dedication to painting as an addition or an element alien to my religious and priestly vocation, or more broadly to my Christian vocation. It has been cultivated in it and it belongs to it. On the other hand, there is an instrumental dimension that I only understand in reference to that Christian and Augustinian Recollect vocation. The Christian faith and our charism cannot do without the graphic resource to be shared and made known. I consider this task as a mission entrusted to me within our religious family and the Church.

For this reason I do not dedicate myself to other themes that are sufficiently treated by many artists today, for whom art is in many cases a means of expressing their personal feelings.

Certainly, the realization of works of sacred and liturgical art requires sufficiently developing and mastering different areas of painting, such as portraiture, landscape or object painting. However, at the moment they do not attract me as isolated themes but always at the service of a Christian art that needs to be revalued and promoted with works loaded with content and technical quality, thought and spirituality.

We thank you, David, for your words and for being able to delight us with the contemplation of your new painting of the «Bishop of the poor», who, rich before God, will undoubtedly bless you for having approached people in such a simple and original way. Thanks.