2021 was a year full of emotions, hope, and resilience

There was great excitement as the Augustinian Recollect missionary Province celebrated its 400th anniversary. There is also hope as a new Provincial Chapter will soon be celebrated and from which a new program emerges to live and work on as a community. Resilience is to continue amid all the challenges presented today by the pandemic. 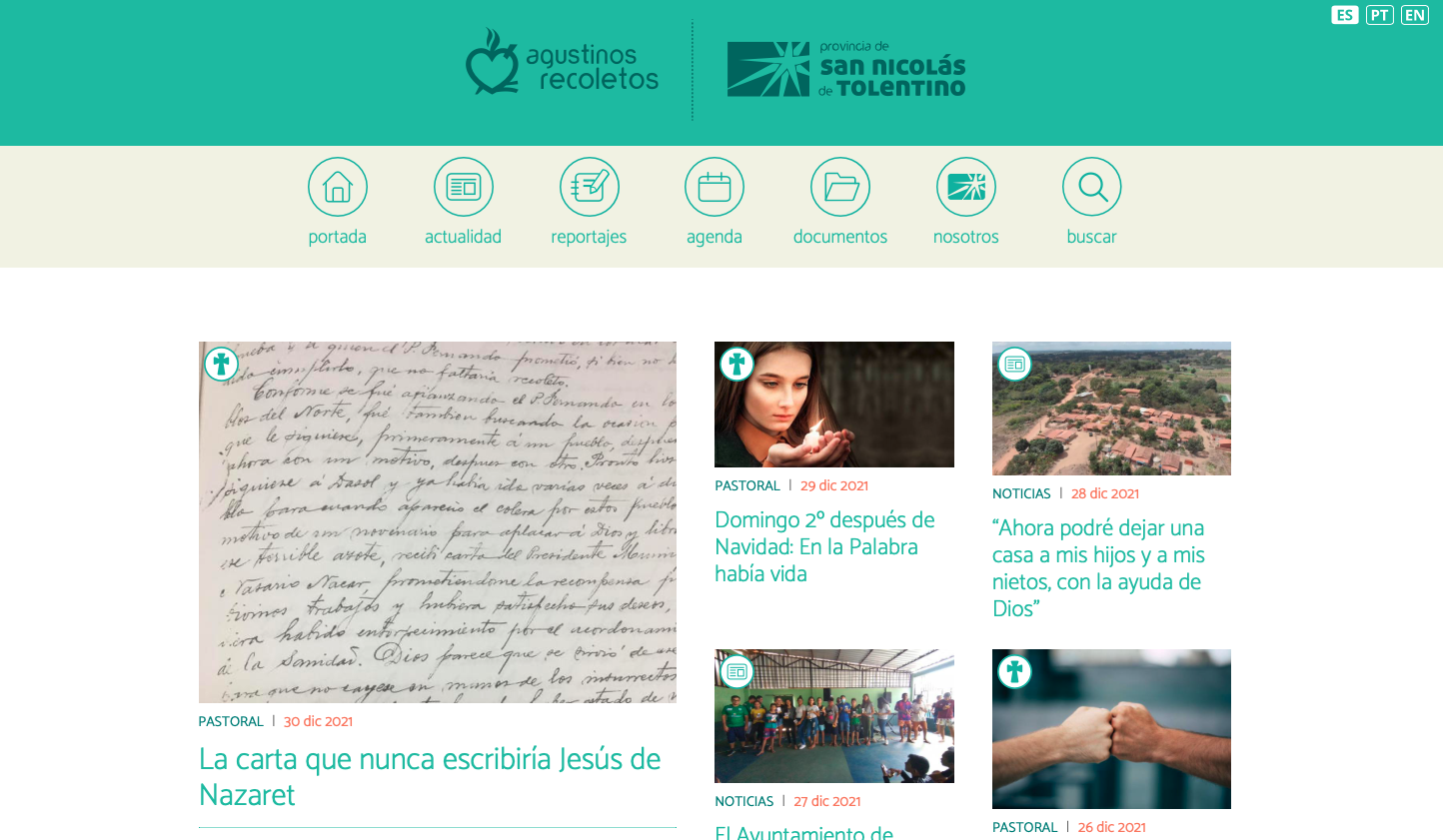 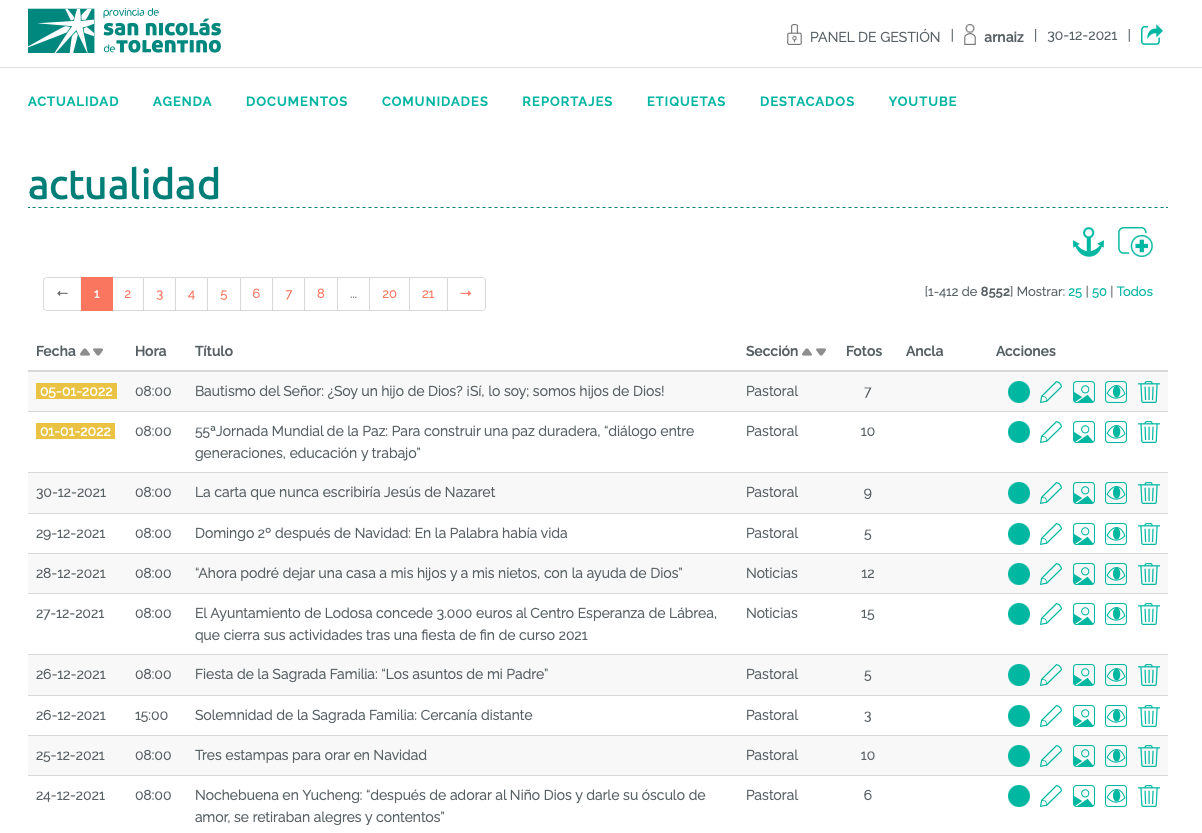 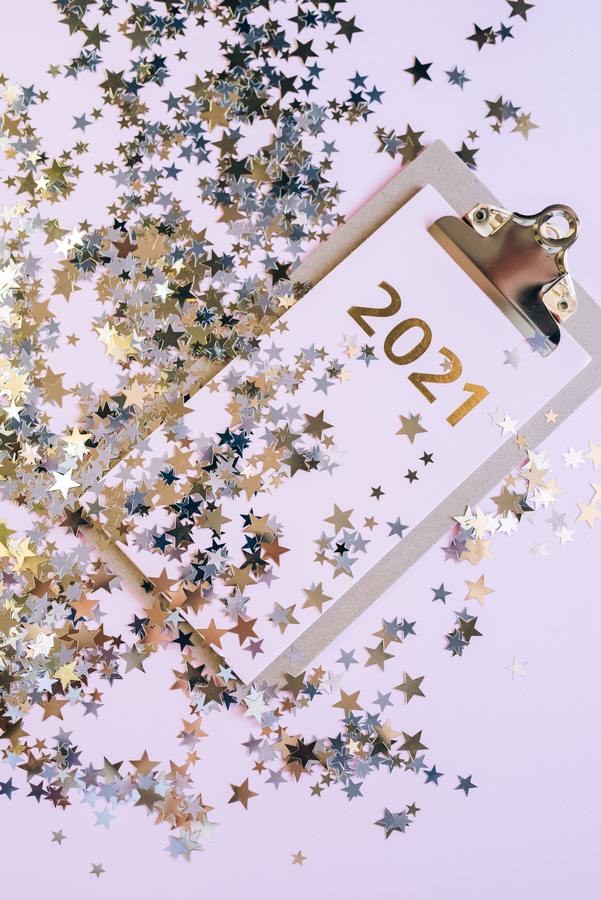 During this past year, AgustinosRecoletos.org has shared 409 posts, of which 258 have been news and description of various events, 142 were pastoral reflections or biblical comments, eight personal testimonies, and a new provincial report. These posts included 4,541 photos and other types of images.

We’ve tried to reach out daily to our followers to inform them of what is happening in the Province of San Nicholas of Tolentino and share who we are and how we live with all of you.

We started in 2021 after the first Christmas during the pandemic. We finalized the immediate preparations for the Chapters (general and provincial) that the Augustinian Recollect Family will celebrate in 2022.

These are the topics presented on our webpage in 2021.

The IV Centenary (1621-2021) of the Province of St. Nicholas of Tolentino of the Order of Augustinian Recollects has been a constant on this website throughout the year. It has been more than a year of celebrations which began on September 10, 2020, and ended on December 4. We presented content related to the celebration, which the Commission for the IV Centenary developed for each month.

The theme for January was the educational Apostolate. We interviewed the president of the Educational Section of the Secretariat of the Apostolate of the Province and presented general data on this apostolate today and in history. We remembered friar educators such as José Oroz Reta and Angel Jubera, and we focused on specific aspects such as the Guidance Departments in our schools.

The religious who work in the educational apostolate took the opportunity to meet and encourage each other. The schools celebrated the Centennial involving their students in unique ways, such as planting a tree to remember the centenary.

Finally, we premiered a video in Spanish and Portuguese about the Educandário Santa Rita of the Augustinian Recollect Missionary Sisters in Labrea (Amazonas, Brazil), an exceptional school with an evident missionary environment.

We talked about the initial formation and shared some personal testimonies from a novice. We remembered some formators from the past, such as Pío Mareca o Victorino Capánaga.

May, old Province of St. Joseph

We remembered the missionary Province’s presence in Venezuela, Trinidad and Tobago, and Peru. Missionary territories that would pass from being part of the Province of St. Nicholas to becoming the independent Province of St. Joseph.

This Province became independent from the Province of St. Nicholas in 1998. It includes the Philippines and Taiwan. St. Nicholas Province ended being present in the islands so meaningful to its origins.

A Filipino Historian shared the details of that time in history between the Recollects and the Philippines (part 1, part 2). Some influential personalities of the time were remembered, such as Diego Cera, and the 400 anniversary of the Recollects in Cebu y and San Sebastián in Manila, or the Provincial House of San Nicolas Intramuros, which was destroyed in 1945.

We presented the Congregations that are part of the Recollect family in the present; the Augustinian Recollect Missionary Sisters are very close due to their history and being a sprout of the Province St. Nicholas of Tolentino. We interviewed the superior general (part 1, part 2), and we presented the martyrdom testimony of Sister Cleusa.

We also presented the Augustinian Recollect Sisters of the Sacred Heart of Jesus, who have offered their services in the Santa Monica Homes in Fortaleza (Brazil) since its beginning. We interviewed Mother Superior General (part 1, part 2).

We focused on the pastoral work of the Province in parishes and service offered by our friars anointed as bishops. For the first part, an interview was done about the Pastoral Project goals of the Province. We showcased the service done by our friar bishops, Francisco Javier Hernández and Carlos Briseño, together with other past bishops in the Philippines.

We spoke about the Ecclesial Base Communities, parishes in the USA, and parishes in challenging environments.

Being the month dedicated to world missions, we reserved this month for our missions, and the Province's Social Projects such as Centro de Atención Psicosocial San Agustín in Fortaleza; Centro Esperanza in Pauiní; the work being done by Asociación Ayuda Fortaleza in Spain; the solidarity campaigns done in schools and the emergency actions taken in Valladolid and Chiclana; our religious too dedicate time to receive spiritual missionary formation during their initial formation period.

We premiered a documentary on safeguarding indigenous cultures in the Brazilian Amazon. We saw the Inculturation process of Spanish missionaries in China at the beginning of the 20th century, and we premiered a report on the immense work of Fray Diego Cera.

In December, we proceeded to the official closing of the IV Centenary. One of the fruits of this Centennial has been the revised history of the Province titled "Always in Mission," which was presented a few days before.

This Centennial has involved a lot of work in publishing various materials: the objective of its production has been to understand this story better to reaffirm the desire for missioning today and continue building the future with that same commitment and impetus.

We presented the Augustinian Recollect bishop Francisco Javier Hernandez who turned 80 years old and celebrated 30 as a bishop. We celebrated 80 years of the Vicariate of Mexico (part 1, part 2, part 3); St. Rita’s Parish in Manaos (Amazon, Brazil); 30 years of the St. Ezekiel Moreno Formation House in Costa Rica; 90 years of the birth of Bishop Alphonse Gallegos who was declared venerable five years ago; our catholic school in Queretaro (Mexico), Fray Luis de Leon celebrated its 50th anniversary; and finally, the Diocese of Tiangua also celebrated its 50th anniversary.

We have also congratulated our brothers who celebrated their Golden or Silver anniversary as professed or in their priesthood. The pandemic did not permit them to gather to celebrate (celebration 1, celebration 2, celebration 3, celebration 4).

It has been one of the most anticipated and also most comforting news for the missionary Province in 2021: on May 22, 2021, Fray Mariano Gazpio Ezcurra (1899-1989), son of the Province of San Nicholas of Tolentino, missionary in China, and formator of many Recollect missionaries, was declared Venerable by the Church.

An extended interview with the postulator of the Order and a series of personal testimonies about his wisdom and the many years of shared community life of many friars with Fray Mariano. We still need to make him better known.

We were present in Marcilla, where this event was celebrated with great joy with the local Church, family members, and other residents from his hometown of Puente La Reina (Navarre).

The words of Fray Mariano when he celebrated Christmas in China were heard by those present on Christmas Eve.

For a Family to have a future, new members are needed to join in and continue the legacy of those who preceded them. Every year, we celebrate the end of the novitiate with the novices professing and adhering to the Order. However, the peculiarity of 2021 is that there have been several and not just one celebration but several new professions.

The relentless pandemic produced an impressive start for this 2020-2021 novitiate. The novices were arriving on different dates, as the circumstances in their place of origin permitted, and Spain accepted petitions for permits.

Finally, six new religious made their first profession in Monteagudo after finishing their novitiate, but in three celebrations months apart (batch 1, batch 2, batch 3). In addition, a diocesan priest professed his vows in Madrid as he returned to the Order, to which he had already belonged before.

From our Family, we accompany in their profession ceremonies the Augustinian Recollect nuns: Manuela Ferreira, Rita Ribeiro, Maria Victoria y Mariana, Fabiola Andrade, Alida Antonieta and Brenda Graciela, Guadalupe Jiménez and Mary Grace D. Gicos. It is a great joy for all to know that contemplative monasteries continue to focus on new vocations.

Pope Francis declared the Year of Saint Joseph. Our page has joined this tremendous ecclesial celebration, especially as this did not require much effort since Saint Joseph has always been the protector of our Order. Not a few religious have written about the saint.

Generally, on the 19th of each month (about March 19), we have talked about the saint, especially on May 1.

Recollects of all times have dedicated many words and in all formats to the saint: prose, poetry, prayers, reflections, sermons. We turned to Saint Augustine himself, Aurelio Lacruz, Julian Ramirez and José Antonio Ciordia, Luis Garayoa Macua, Saint Ezequiel Moreno, Hernán Biurrun, Luis Arribas Martinez, Victorino Capanaga, the venerable Mariano Gazpio , the venerable Alfonso Gallegos, Pablo Panedas and the current prior general of the Order, Miguel Miró. Finally, we offered a closing reflection of the Josephine Year written by the Augustinian Recollect, Michael Stechmann.

We have portrayed the ordinary life of the communities of the Province, ministries, socio-evangelizing projects of the Province, charismatic groups, associations that support the missions. The year has been extraordinary and challenging for everyone, different from everything before 2020. But the tasks and services have been accommodated as far as possible. And we have reported on it too.

However, we want to highlight a few unusual facts:

The prior provincial has not had an easy time following the schedule to make his official visits to all the communities of the Province due to so many pandemic restrictions. His plans changed on various occasions. Finally, he was able to visit Mexico in 2021 and the United States (part 1, part 2), and he was only able to visit virtually to Brazil. God willing, he will visit personally this month of January 2022.

On December 29 and through internal channels, the year ends with the delivery of the Prior Provincial Report on the state of the Province, together with the material to vote for the delegates to the 128th Provincial Chapter, which will take place in Marcilla, Navarre, Spain. The Commission in charge of preparing this Chapter has also been appointed.

Fr. Provincial was able to meet with the vicars and delegates of the Province to evaluate the four years. Vocational formators and promoters also met with a similar objective and improved communication between them as they worked the various formative stages.

We hope that during this New Year, the Lord will grant many blessings to all in the form of peace, health, well-being, solidarity, and celebration. And much wisdom for the Augustinian Recollect Family to design a program that will strengthen all the family members to sow our charism, which certainly can offer so much of what humanity hungers: community, wisdom

enlarge
And what do you think about this?
Tags
The last
Educational ministry of the Augustinian Recollects in the United States
"The strength of our charism and the assistance of the Holy Spirit make us optimistic and hopeful that the 56th General Chapter will bear good fruit"
Colegio Romareda wants to participate in the rescue of the planet
A bakery in a convent in solidarity with the victims of climate change and the pandemic
"75 years journeying with hope": The Augustinian Recollect Missionary Sisters opened a jubilee year to remember their official recognition as a Congregation.
And what do you think about this?