“The only economic and social model that exists today for the Amazon is based on extracting all its natural wealth not concerning the inhabitants of our Common House”.

The Augustinian Recollect, Jesús María Cizaurre, Bishop of the Diocese of Braganca do Pará (Brazil) is about to land in Rome to participate in the special Assembly for the Panamazonic Region in preparation for the Synod of Bishops (6-27 October 2019). Weeks before his departure we wanted to talk with him about this important ecclesial event for the Augustinian-Recollect Family present in the Amazon. 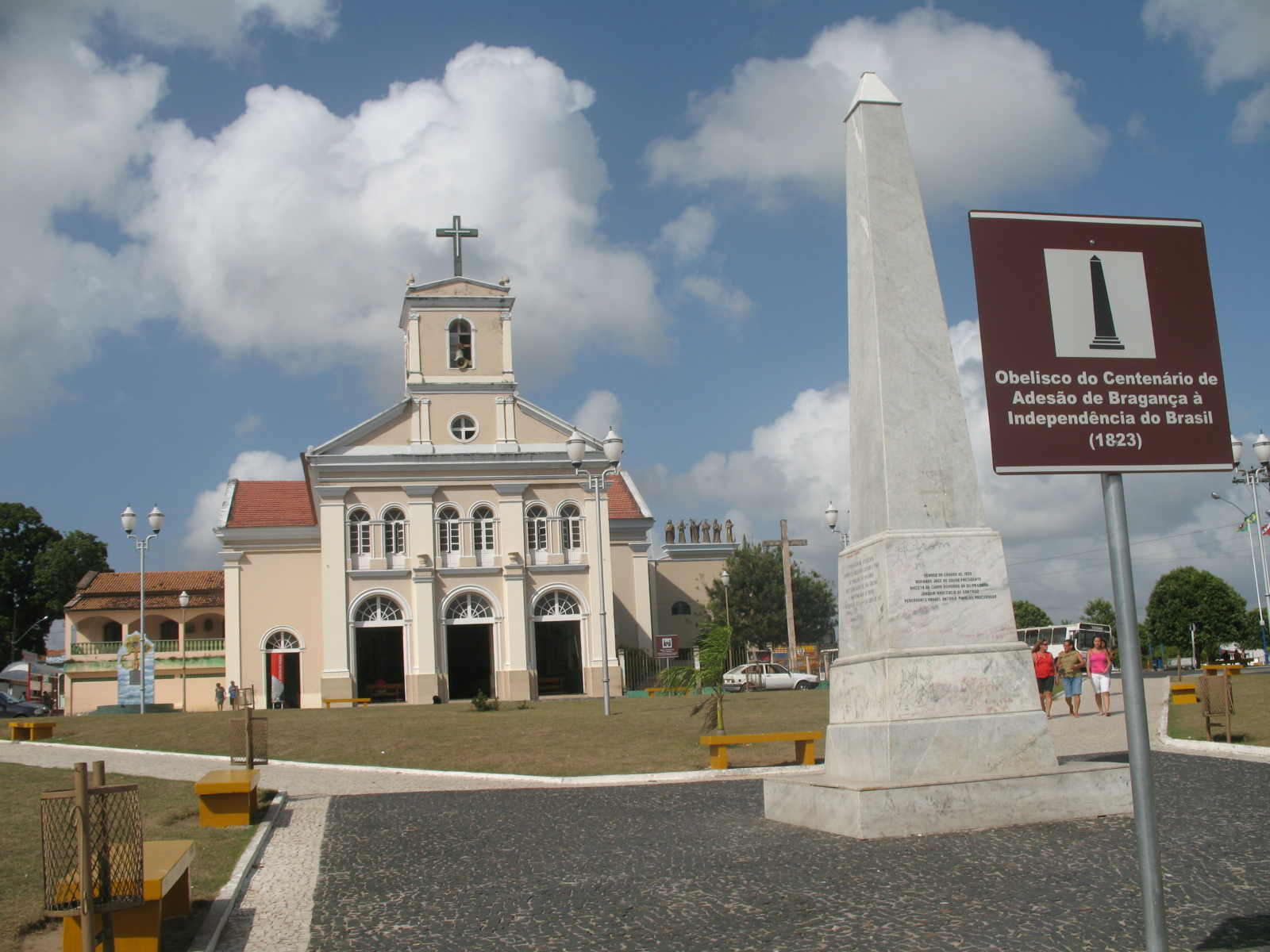 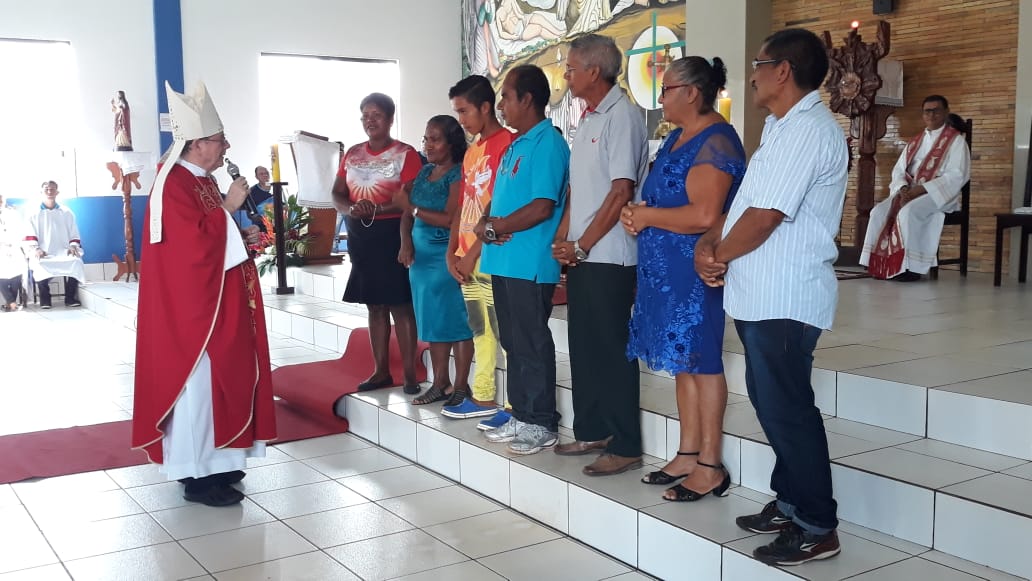 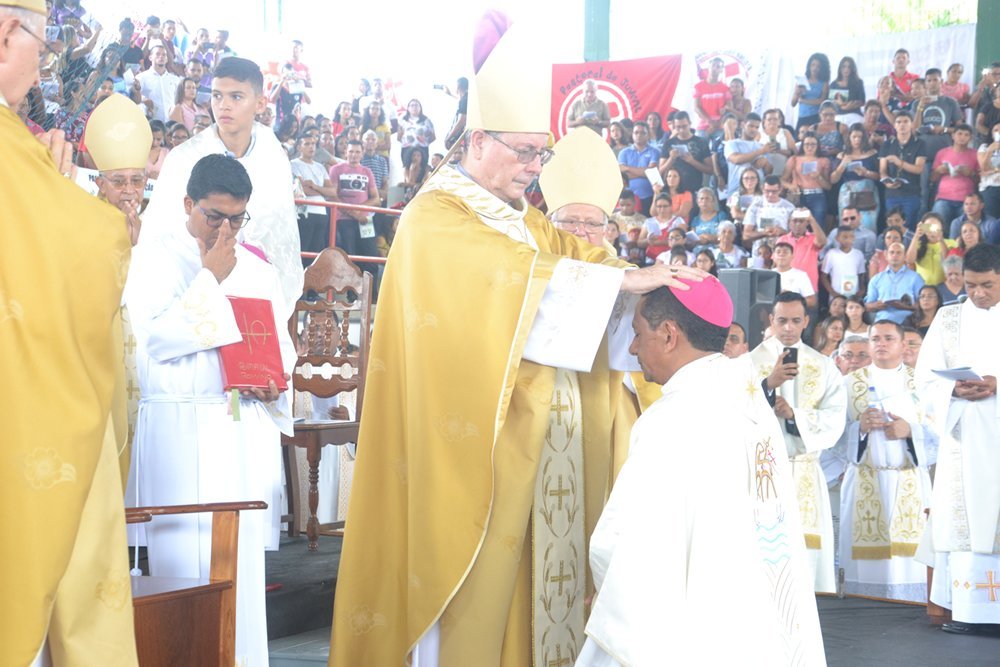 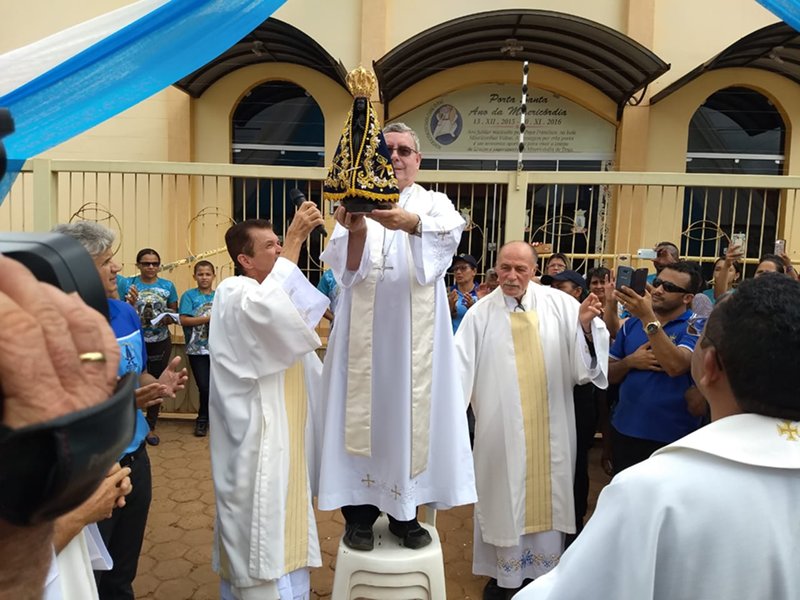 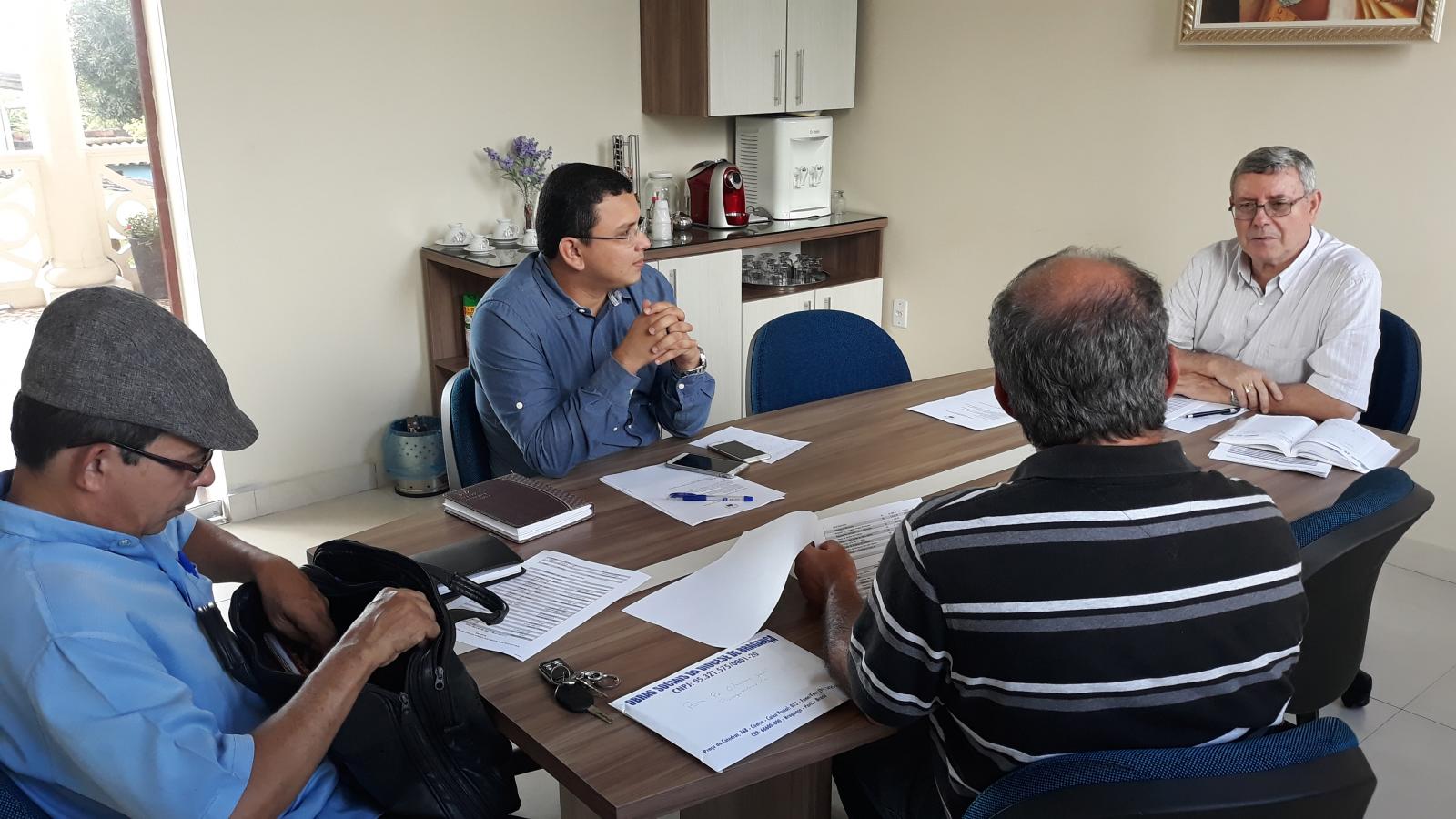 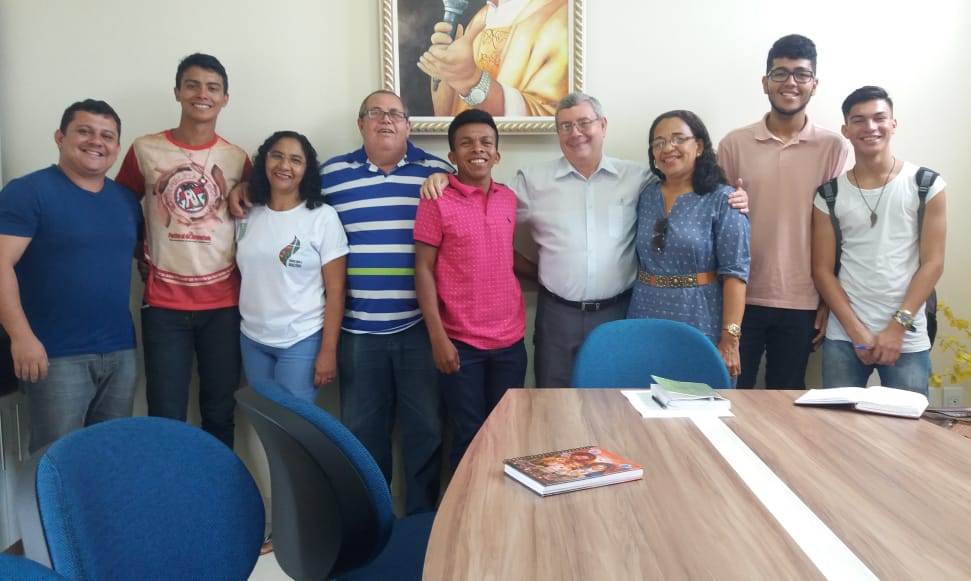 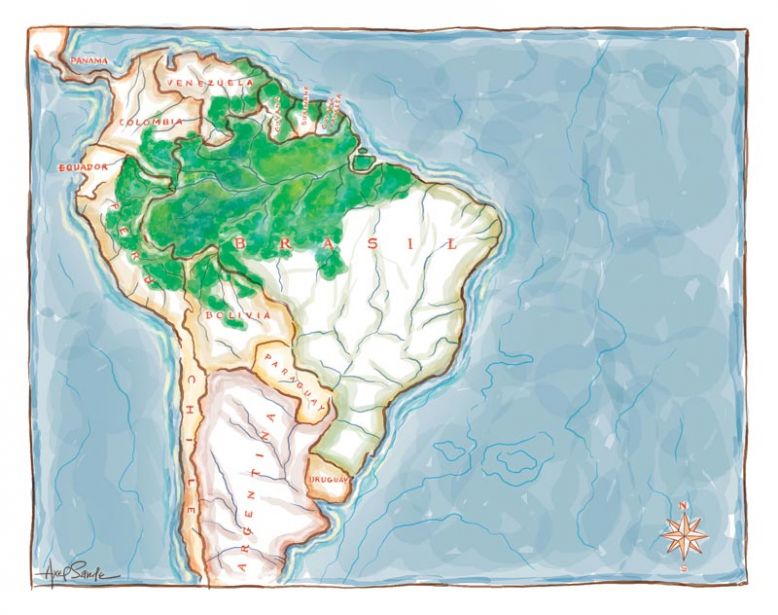 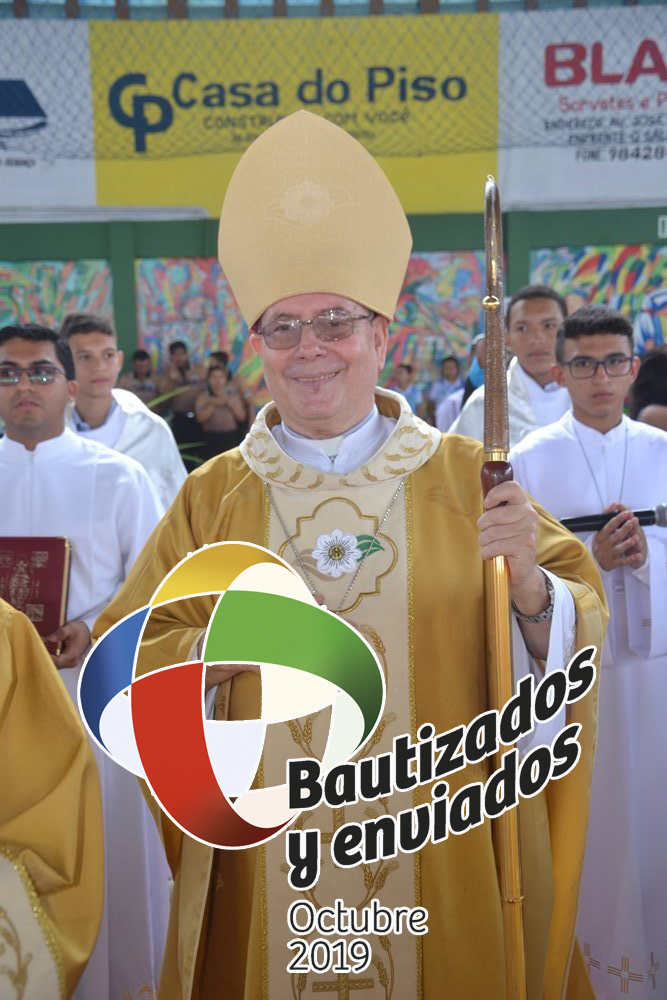 Jesús María Cizaurre (Valtierra, Navarra, Spain, 1952) is a Recollect Friar and bishop of Braganca do Pará, a Diocese of over one million inhabitants, of which 71% are Catholics, in a territory expanding some 68,316 square kilometers which includes 20 municipalities of the Brazilian state of Pará, and it has 28 parishes plus their community chapels. The Diocese is located on the south and east side of the Amazon River mouth, just over 200 kilometers from the state capital, Belém.

The life of this Augustinian Recollect bishop has been linked to Brazil since his ordination in 1976. First he was a missionary in the Prelature of Marajó, the river island located right at the mouth of the Amazon, where he served in the parishes of Portel, Afuá, Salvaterra and Soure. He  later became the coordinator of his Recollect brothers in the Prelature as well as rector of the seminary.

In 1990 he was sent to Sao Paulo for four years, in 1994 he returned to the State of Pará as parish priest and episcopal vicar in the capital, Belém, and since 1997 vicar of the Recollects of  Brazil. The year 2000 was when he was appointed first bishop of the newly created Prelatura of Cametá, in the valley of the Tocantins River, west of Belém. It was then officially made into a diocese in 2013. In 2016 he received the appointment as fourth bishop of the Diocese of Braganca.

He knows this territory very well since coming here almost 40 years ago. His pastoral activity has taken place in both missions in small isolated rural parishes, and in large cities such as Belém, and now as a bishop. We wanted to know what his thoughts were in reference to the Synod for the Amazons that will take place in October of this year.

As a bishop of a diocese with a population of one million, what are your expectations in reference to the Synod?

First of all, I think it is appropriate to indicate the origin of this Synod. The bishops of the dioceses located in the Amazon have long since been talking about the possibility of a broad ecclesial meeting that contemplated the participation of the Dioceses and Prelatures of the nine countries that make up this region of the world, to reflect on our own Amazonian problems and share  our pastoral experiences.

With the creation of the Pan-Amazonian Ecclesial Network (REPAM) in September 2014, the ecclesial meetings that were already taking place in the Brazilian Amazon became more frequent and with greater participation and with a good number of representatives of the Dioceses of other Amazonian countries.

But it was at the meeting of the Pope with Brazilian bishops in Rio de Janeiro, during World Youth Day in 2013, that he requested we prepare a special synod for the Amazonian region.

I recall Pope Francis seriously mentioning this idea that is now a reality. I believe that his participation, as Cardinal Bergoglio,in the Fifth Conference of Bishops of Latin America and the Caribbean, in Aparecida (May 2007), awakened in him a greater interest in this region.

For this reason, when Pope Francis convened the Synod for the Amazon he did so indicating two central themes: To seek new paths of evangelization, and attention to its ecology.

The Instrumentum laboris of the Special Assembly for the Pan-Amazon Region of the Synod of Bishops (6-27 October 2019) reaffirms the urgency of focusing on the present and the future of the Evangelization of the nine countries which are within the Amazonia and with a total of 8.1 million square kilometers and with some 37 million of population with a large diversity of cultures and their particular history.

How did your diocese prepare for the Synod?

Important to say that our geographical territory which was mostly jungle, has been seriously destroyed with the construction of paved roadways. The jungle has been cleared to make way to open fields for grazing their animals and soybean plantations.

The roads attracted investors from the south, constructing large sawmills. The indian reservations are the only reminder of what it used to be.

Because of this devastation and also because of the pastoral challenges we have today, the Synod has been accepted with great interest amongst our people. They have really made themselves present to be heard as ecclesial communities, pastoral groups and their service, ecclesial movements, and even non catholic groups such as unions and universities.

The preparation for the Synod has given importance to listening to the people. All the faithful were invited and they have approached the workshops with a lot of interesting thing to say, especially sharing their concerns and problems in their evangelization mission and protection of the environment.

It was interesting to read the answers that came to the Diocesan Curia, expressing concern for the increase of Pentecostal sects, the inactiveness of some ecclesial communities, the lack of communion of some ecclesial movements with the rest of the Church, and the need of better formation for the clergy.

What was said was summarized and sent to the Brazilian Episcopal Conference (CNBB) which then sent the data to the Secretariat of the Synod which prepared handbook that has been studied in parishes, ecclesial communities, pastoral services and ecclesial movements.

The participation of all the diocese of the region have helped us to have a more general view of the social reality of the Church in this part of the world.

Our people are happy that their bishops are being invited to participate in the Synod. People are excited about the Synod and they keep telling me that they are truly praying for their bishop and the Synod. I sent a letter to all parishes and communities in May asking them for their prayers for the success of the Synod; that it may be a of great help in our mission of evangelization.

We have also published and distributed a pamphlet on the extraordinary missionary month convened by Pope Francis for October. The coincidence of these two celebrations on the same dates is helping us to foster the missionary dimension in the local Church that must desire to be a Church that is willing to go out of herself to evangelize those in other regions.

What do are the people expecting from the Synod?

The first stage of work already presented some social and pastoral challenges and measures for our Amazonian reality: Urban concentration due to migration of the poor looking for work and have their own land. The sad practice of corruption at all levels of society, ambition of the rich coming into the jungle to take the wood, minerals, destroying the biodiversity, energy and hydrocarbons), sectarian religious groups that only divide families and villages. This makes us consider the need of a much serious process of evangelization.

We´ve tried so many models to plan our pastoral activities in the past; some have worked great but have lost their vitality. We need to implement a way of bringing the faithful into a deeper experience of faith and avoid the mere maintenance of what has been done for so long.

In the Diocese of Braganca our hopes are mainly set in a personal spiritual renewal that will make pastoral renewal possible.  We do not expect many new developments, nor miracle solutions, but we are certain that the Synod will be a time of action of the Holy Spirit whose fruits will be prolonged and spread throughout the Church of this region and for the resto of the world.

Will we be able to save the planet’s lung from capitalist’s greed?

On the issue of environmental preservation I think the issue has been very well focused in addressing the comprehensive ecology, which includes the 25 million people living in the Amazon. It is good to remember that more than 37 million people live in the international Amazonian region.

The Government of Brazil and its policies have long seen the Amazon as an uninhabited, empty green territory. It’s where people live!

The synod will consider this topic giving it great importance, just like Pope Francis previously did in the encyclical Laudato Si. We need to understand the serious environmental problems in the Amazon.

Considering the environment, it has been one loss after another in this long lasting war. Enormous forest areas are vanished each year in the hands for capitalism. The Government has no interest in preserving it, on the contrary, it makes it easy for large companies to come and continue the destruction of our jungles.

The economic objective has been to extract all the natural wealth in the region, without considering the people who live here. The only objective is profit through the exportation of all the natural resources.

I tend to be pessimistic when it comes to this topic; I fear that what the Synod will say about what must be done, will be easily ignored and forgotten.

Maybe another economical model could me implemented to save the forests. A model that will bring human, social and economic development for people of the Amazon.

Whatever happens, we have the certainty that God is with us; He will always be with the humble people of the Amazonian forest. Let us all pray for the success of Synod.

enlarge
And what do you think about this?
Tags
The last
"Free a Girl" and "Santa Monica Home", institutions united by a world without commercial exploitation of girls and adolescents.
All Saints Day - Solemnity
Mariano Gazpio and the missionary's loneliness
The Santa Monica Home of Fortaleza presents its first newsletter
The Augustinians Recollects at the forefront against the prevention of child sexual abuse
And what do you think about this?